Pope Francis on Wednesday expressed shame and sorrow for the role Catholic institutions played in the “deplorable” residential school system, promising the church would help promote the Indigenous cultures the schools tried to erase.

Speaking at Quebec City’s historic Citadelle, Francis asked forgiveness for the harm done by the policies of assimilation carried out in the schools.

“In that deplorable system, promoted by the governmental authorities of the time, which separated many children from their families, different local Catholic institutions had a part,” Francis said.

“For this reason, I express my deep shame and sorrow, and, together with the bishops of this country, I renew my request for forgiveness for the wrong done by so many Christians to the Indigenous Peoples.”

It is the second papal apology on Canadian soil for Francis, who is midway through a six-day tour he has described as a "pilgrimage of penance.” On Monday, he begged forgiveness for the “evil committed by so many Christians against the Indigenous Peoples," during a speech in Maskwacis, Alta.

But neither the apology on Monday nor the plea for forgiveness in Quebec City Wednesday directly mentioned the sexual abuse that Indigenous children suffered in residential schools. Earlier in the day, in an interview with The Canadian Press, Crown-Indigenous Relations Minister Marc Miller said that omission was part of the "gaps" in Pope Francis's apology in Alberta, which the minister said can't be ignored.

In his remarks introducing the Pope in Quebec City, Prime Minister Justin Trudeau attempted to fill in part of that gap.

He said Indigenous Peoples have been for years calling on the Pope to apologize to survivors, their children and grandchildren, and to First Nations communities.

“Apologies for the role that the Roman Catholic Church, as an institution, played in the mistreatment on the spiritual, cultural, emotional, physical and sexual abuse that Indigenous children suffered in residential schools run by the church,” Trudeau said.

The Pope left Edmonton on Wednesday morning and arrived mid-afternoon in Quebec City, travelling to the Citadelle of Québec for private meetings with Gov. Gen. Mary Simon and Trudeau.

In his speech, Francis said his time in Canada has left him with a “firm desire” to move forward on reconciliation and to help heal the deep wounds of the past.

In an address delivered in Spanish and translated into several languages, he said the church is committed to responding in a “fitting way” to the appeals of the Truth and Reconciliation Commission of Canada, which examined the abuse that took place in residential schools and published recommendations to address it.

He added that the church was committed to promoting Indigenous culture through “specific and appropriate forms of spiritual accompaniment that include attention to their cultural traditions, customs, languages and educational processes” in the spirit of the United Nations Declaration on the Rights of Indigenous Peoples.

Before his address, the pontiff was presented with a wild turkey feather and sweetgrass by a Huron-Wendat elder, Raymond Gros-Louis.

Simon, speaking just ahead of the pontiff, said the Pope's visit was an important step toward further dialogue and actions that will lead to real reconciliation.

"Indeed, we look forward to hearing more of the church’s future actions to continue this essential work," said Canada's first Indigenous Governor General, who delivered her speech in English, French and Inuktitut.

The atmosphere was more festive later at the Plains of Abraham, where crowds cheered and chanted, “Thank you,” as Francis did a drive-by tour in his popemobile. Francis, accompanied by the archbishop of Quebec, smiled and waved from the back of a white Jeep and occasionally kissed babies who were passed over the barricades and dangled into the vehicle by security staff.

A second apology from the Pope had been a demand from some Indigenous leaders in Quebec, who said they deserved to hear the pontiff ask forgiveness on their home soil.

Those who gathered the Plains of Abraham ahead of Francis's speech, however, expressed mixed opinions on whether another apology would satisfy them.

There was a heavy police presence on the grounds, as concerts and other artistic performances took place throughout the afternoon. While the site's capacity is over 100,000 people, the crowd that had gathered just over an hour before the Pope's scheduled arrival was only a fraction of that number.

For residential school survivor Omer St-Onge, the Pope's visit represents a "small step" in a journey of healing. But St-Onge, who comes from the Innu community of Uashat-Maliotenam, on Quebec's north shore, said before the Pope's address that he was hoping for more than just an apology.

"It's time for the Pope to decide to give us back artifacts, objects that were taken from us that are all at the Vatican and in churches, documents about young people who died," said St-Onge, whose birth name is Uapan Ushekatok.

Fabien Jaubert, also from Uashat-Maliotenam, said he had come to honour the memories of residential school survivors, including his grandmother and aunts.

“I’m expecting an apology from the Pope,” he said in an interview on the Plains of Abraham ahead of the pontiff's arrival. “I would like to hear him make one on behalf of the church, instead of just certain actors.”

Among those present at the site was a group of Indigenous marchers who walked 275 kilometres from the site of the former Pointe-Bleue residential school in the Innu community of Mashteuiatsh in Quebec's Saguenay region. The group, who started walking last Thursday, were greeted with cheers as they arrived onstage.

The Pointe-Bleue institution was the last of the federally funded, church-run schools to close in Quebec, in 1991. Chantal Niquay, who attended the school, described the march as "liberating" and said it was helping her heal from the scars of the past.

"I had my children young and I wasn't totally there for them, but today I understand why. We give each other so much love,” the 43-year-old woman said.

Mike Parayaoan of Montreal, who lined up with 15 family members at 8 a.m., was among the first on-site. He said that while there were "mixed emotions" surrounding the visit, his main feeling was one of excitement.

"It’s a once-in-a-lifetime event that me and my family could attempt to see the Pope,” he said.

After visiting the Plains of Abraham, the Pope headed to the residence of the archbishop of Quebec, where he plans to stay during his time in the province.

On Thursday, Francis is to hold a mass at the shrine of Ste-Anne-de-Beaupré, east of the city, then attend vespers with church officials at the Cathedral-Basilica of Notre-Dame de Québec.

On Friday, he is to make a brief stop in Iqaluit before heading home to Vatican City.

This report by The Canadian Press was first published July 27, 2022.

— With files from Frédéric Lacroix-Couture in Quebec City and Morgan Lowrie in Montreal. 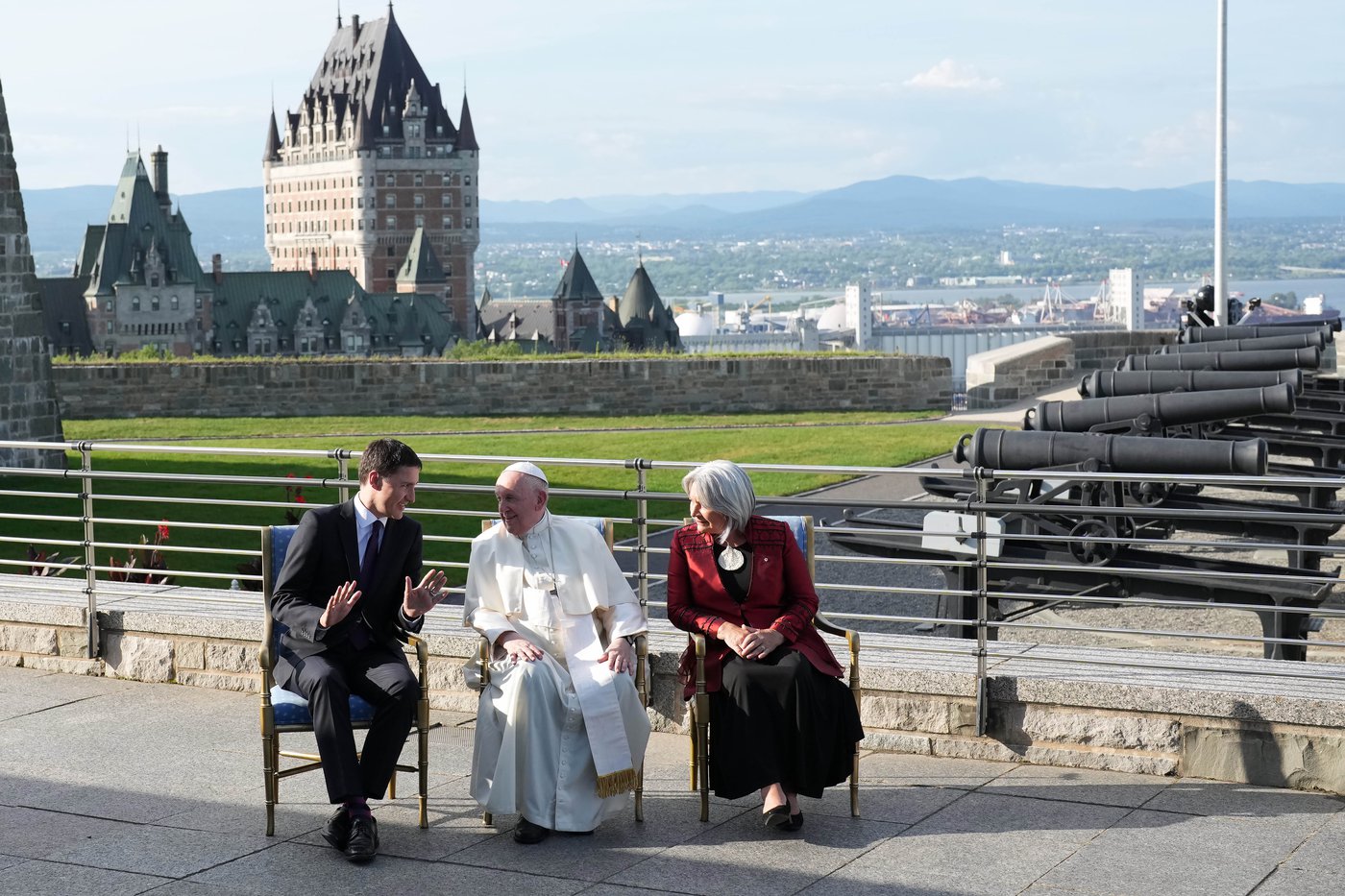 Lily Meschi: A story of hope and restoration

Kings Kids Back to School Event

Knitters Circle at the GPPL